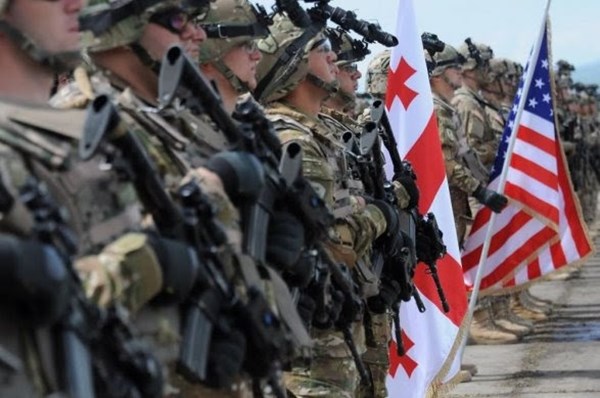 NATO’s multinational military exercises, Agile Spirit, are being held in Georgia, which includes command and staff exercises as well as field exercises. Besides the Georgian and U.S. military, this year’s Agile Spirit is also attended by representatives from Turkey, Ukraine, Bulgaria, Romania and Latvia. The goal of the exercise is to improve the interaction of the Georgian military with colleagues from the United States and partner countries, to ensure support of the security in the region and to improve offensive and defensive experience.

Specifically for these exercises, U.S. heavy military equipment, including armored personnel carriers and American artillery, were delivered to Georgia earlier by ferry from the training ground in Novo Selo in Bulgaria. After completion of the exercise on September 13th this equipment will be sent back to Bulgaria.

Starting from 2011, Agile Spirit exercises were held in Georgia annually but only within the framework of the U.S. military cooperation with Georgia. These exercises were designed to improve the compatibility of the Georgian armed forces with NATO standards and to improve preparedness of Georgian troops for participation in international peacekeeping operations. Since 2015, Agile Spirit has turned into a program of multinational military exercises. The United States and Georgia initiated new annual joint exercises called “Noble Partner” that took place last year, as well as in May this year at the Vaziani training ground.

This year, 500 Georgian, 650 American and 150 British soldiers participated in the exercise. Their goal is to increase the combat readiness of the Georgian military as part of NATO's rapid reaction force, which Georgia joined in September 2015. Among the countries that are not NATO members, rapid reaction forces from Finland, Sweden and Ukraine are also involved. The aim of these forces, created in 2003, is to participate in peacekeeping operations, to assist during disasters and to counter crises before they escalate.

Moscow criticized the Noble Partner 2016 exercises even before they started, calling them "provocative.” In response to accusations from Moscow, the Georgian Ministry of Foreign Affairs also issued a special statement that said "these exercises are not directed against any side."

Speaking about the importance of joint military maneuvers of Georgia and NATO, experts in Tbilisi believe that although these exercises do not guarantee Georgia's accession to NATO, they do increase the combat training of Georgian troops while at the same time bearing a "political message.”

In an interview with Voice of America, the chairman of the Caucasian Institute for Peace, Democracy and Development, Ghia Nodia said the message is that Georgia is a reliable partner of NATO. According to Nodia, that very message displeases Russia.

"The prospect of Georgia's accession to NATO at this stage is very vague. The fact that Georgia is NATO's partner also does not guarantee complete safety, while at the same time, it does to some extent increase the level of safety for Georgia. Therefore, carrying out such exercises emphasizes Georgia's role as a stable and reliable partner of NATO. Russia is irritated just because of this, because it believes that post-Soviet countries should remain within its sphere of power," Nodia said.