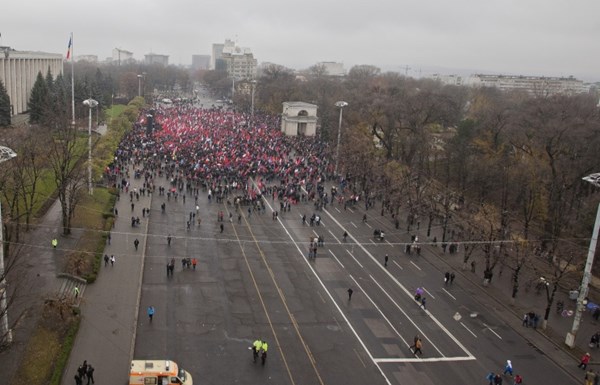 Representatives of the Moldovan opposition delivered an ultimatum to the authorities in Chisinau. RIA Novosti reported that the group threatened to block routes of international and national importance if their demands are not met by Thursday, January 28th. A major protest rally was held in Chisinau on Sunday, January 24th.

According to police, there are nearly 20,000 people taking part in the protest held in the central square of the capital of Moldova. Organizers stated that more than 100,000 protestors have taken to the streets. A column of protesters marched on the main square of Chisinau towards the outskirts, blocking traffic on the central streets northern causeways for an hour.

"These national and international routes are blocked today and other national routes will be also blocked if [the authorities] do not meet our demands by , Thursday. We will block routes, railways and airports,” stated the leader of the Socialists party, Igor Dodon. The leaders and supporters of the Socialists Left Party and “Our Party” have taken to the streets. Moderate-right Civic Platform DIA (“Dignity and Truth”) spoke out against Paul Philip’s government, calling for the dissolution of parliament and early elections of deputies.

On January 20th, deputies approved the new head of the government, Paul Philip, the representative of the Democratic Party. On the same the opposition tried to break into the parliament building in Chisinau. A fight ensued between the policemen and protesters near one of the building’s exits. As a result, 30 people were injured, 27 of whom were policemen. The General Prosecutor of Moldova opened a criminal caseto investigate the riots.

Moldova began 2016 without a government after the current Cabinet of Ministers headed by Valery Strelets was dismissed on October 29th, 2015 after being voted out in parliament.