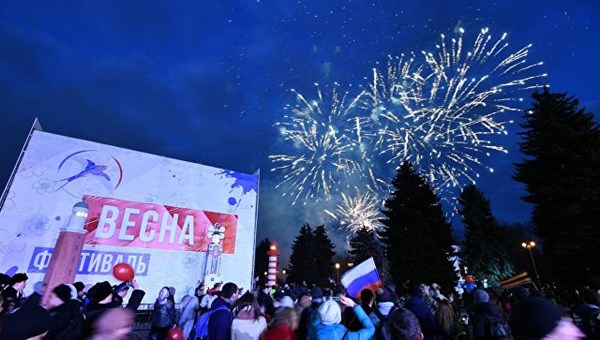 On Saturday March 18, a rally concert was held in Moscow, dedicated to the third anniversary of Russia’s annexation of Ukraine. According the Russian Ministry of Internal Affairs, it was attended by around 150 000 people.

According to the Russian newspaper “Meduza”, attendance at the rally was remunerated. Willing attendees were gathered through the website massovki.net, where each person was promised 300 rubles for attending.

“The group members, acting as representatives of the ‘Independent trade union of theater and film actors’, accompanied by a coordinator, spent two and a half hours on the Vorobyovy gory (Sparrow Hills), and received remuneration at the end of the rally,” the publication reports.

According to one of the participants in the rally, in this way she has “attended four rallies per year for ten years already; usually, the rally for Luhansk and Donetsk People’s republics , the 1st of May, the Victory Day rally, and some irregular ones, like events on the Vorobyovy gory”.

Another woman mentioned how she worked as a teacher in a Siberian school, and when it was closed, she moved to Moscow, and now as a side job for her pension she goes to TV shows such as ‘Let them talk’ for money.

“I live a quiet life, it actually makes little difference to me that the Crimea was annexed. I didn’t go there for the idea, I went just to get a little bit of money. I treat this as work,” the participant told the publication.

Amongst other things, work implies that people from the group try not to take a single step away: “If the coordinator loses sight of us, how will we prove that we were here? Then he won’t pay us.”

The actual coordinator, when asked whether crowd participants in the rally were paid by the Russian authorities, responded in this way: the state requires the party to get people, the party delegates this to the trade union, and the trade union delegates it to Vitaly. After the rally, the coordinator settled accounts with each of the participants at the metro station.

As the publication points out, during the rally most people on the Vorobyovy gory stood in groups of 25 at most; hardly any married couples or people not belonging to groups were seen.