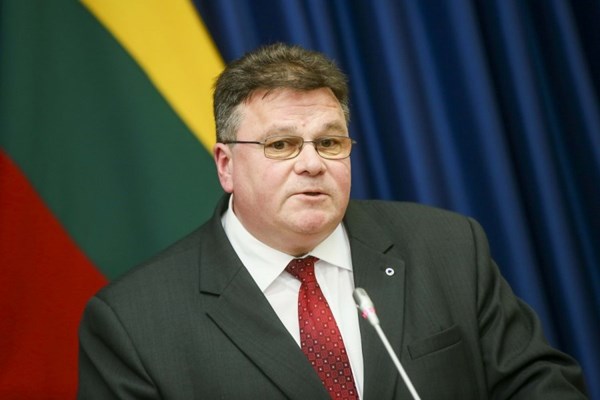 Lithuanian Foreign Minister Linas Linkevičius believes that only a principled and unified position of the West will stop Russian aggression as expressed in his article, "Enough: NATO Should Stop Feeding Russian Trolls", published in Politico.

"If Moscow wants to participate in a real partnership with NATO, it must cease its unreasonable and provocative military operations on the borders of NATO countries; including the flights of Russian aircraft with disabled transponders over the Baltic Sea, which threaten even civilian aircraft, violate the airspace of Turkey and carry out large-scale military exercises without warning its neighbors. Requiring less is not an option, as it will open the door for repetition of the same mistakes again and again. The lessons of the 21st century are the same as of the 20th- the aggressor will stop only when he meets a principled and unified position," believes Linkevičius.

The Minister stressed that serious dialogue between NATO and Russia would solve "real problems."

"A good starting point would be to recognize that the Kremlin is a party to the conflict in Ukraine. Russia should recognize its aggression in Ukraine, withdraw its troops, ensure border control and return the Crimea. It will not happen at once, but Russia should immediately take the first steps in this direction and prove that it wants a constructive dialogue," noted Linkevičius.

He is convinced that reasonable policies by the West towards Russia should be developed taking into account the actions of the Russian leadership, not its statements.

"Terrorist threats or needs to solve migration issues should not lead us to a state where we close our eyes to Russian aggression, its threats against our neighbors and its disregard for international law and agreements. No country should be able to pick and choose which rules it will obey and which ones it will not at the expense of the sovereignty of other countries and the world," he stressed.

The head of Lithuanian foreign policy said that the dialogue can only yield results if it is "a really constructive dialogue, and not an attempt to undermine diplomatic and democratic principles."

"If Russia intends to use the dialogue with the West as a platform for propaganda, then meeting with Russian officials is no more useful than watching Russia Today - a television channel financed by the Kremlin, which would rather be known as Russia Yesterday, for its glorification of the Soviet era and the cold war. Holding meetings the meetings’ sake is useless. Russia must prove with its actions that it is really ready for a dialogue," said Linkevičius.