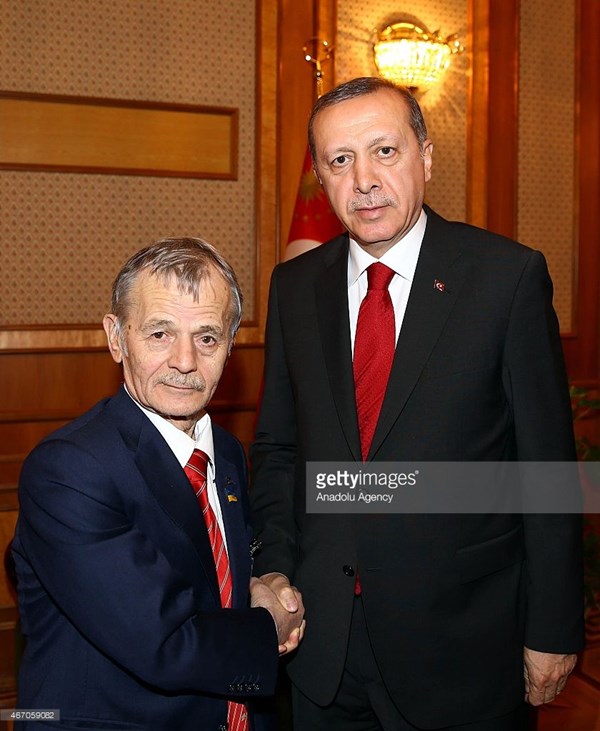 On 17th December, Turkish President, Recep Tayyip Erdoğan met with the Ukrainian presidential envoy for Crimean Tatar People’s Affairs, Mustafa Dzhemilev, Anadolu reported. The meeting took place in a hotel in Konya. The Turkish Vice Prime Minister, Yalçın Akdoğan also participated in the meeting, which lasted about 40 minutes. Neither of the parties has disclosed the details of their discussions.

A sizeable portion of the Crimean Tatar Diaspora (more than 1000 people) live in Turkey. In August, the second Worldwide Congress of Crimean Tatars took place in Ankara, where delegates discussed the annexation of Crimea by the Russian Federation.

Earlier, Mustafa Dzhemilev suggested that Russia had placed nuclear weapons in Crimea. “In any case, it is well-known that they have fully restored the nuclear storage facility in Kyzyltash near Yalta. This storage facility was closed and emptied after the signing of the Budapest Memorandum on Security Assurances in connection with Ukraine’s accession to the Treaty on the Non-Proliferation of Nuclear Weapons in 1994. Missiles with the capacity to transport nuclear weapons have recently been introduced to Crimea,” the leader of Crimean Tatars noted.

On 16th December, Lenur Islyamov, a coordinator of Crimea’s blockade forecasted the start of the sea blockade of Crimea. According to the Chairman of the Mejlis of the Crimean Tatar People, Refat Chubarov, de-occupation of Crimea will take place in 2018.

On 15th December, during an official visit by Polish President, Andrzej Duda to Ukraine, the President of Ukraine, Petro Poroshenko stated the need for international involvement to ensure the de-occupation and demilitarization of Crimea. The Ukrainian President also opposed the turning of the Ukrainian peninsula into a Russian military base.

As ZN.UA reported, the militarization of the peninsula by Russia, followed by the protests of NATO, USA and Ukraine, has moved into an open phase.