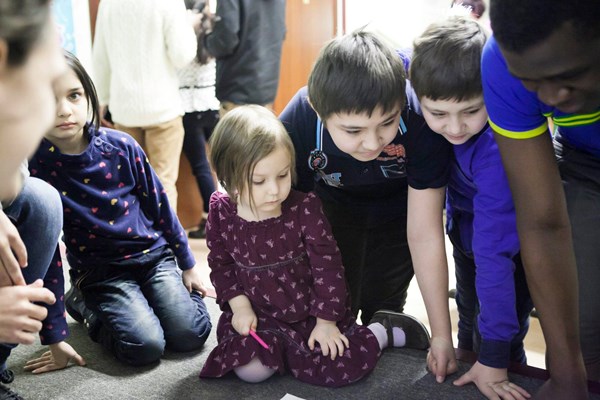 Authorities in Moscow have evicted the Center for Adaption and Training of Refugee Children after its managing committee was deemed to be a “foreign agent”, as reported by Radio Svoboda.

The Center is a project of the non-governmental organization Civil Assistance Committee. When the center’s director, Olga Nikolaenko, arrived at work on Thursday, she found that employees of the city’s property department were barring the center’s workers from entering the building.

“The front door to the center in our basement was opened. There were about five men. I asked what was happening. One said he was a representative of the Property Department… [he said] the center was evicted, and therefore, they could dispose of anything at their discretion. At first, they refused to let me inside. After some persuasion, I was allowed to pick up my personal computer. I was escorted by two people, just to get my computer and back,” Nikolaenko told Radio Svoboda.

The Center had been aiding 70 refugee children from Syria, Afghanistan, several African countries, and Chechnya.

"At first they were mostly children from Chechnya. Some of them were schoolchildren, and had been sitting in cellars for two years; they did not understand anything, all was forgotten.Our task was to train and adapt them so that they could learn and integrate more into life. Now, we have a lot of children from Africa and Central Asia," the head of the Civil Assistance Committee, Svetlana Gannushkina, wrote in an article for Meduza.

Moscow authorities first decided to evict the Center in May of last year.

“Once the organization was entered in the Register of ‘foreign agents’, we immediately received a letter from the Department of Property on termination of the lease. Then we appealed to various authorities… and the Prosecutor's Office said that the eviction should be settled in court. We were waiting for the summons, and the decision on eviction from the court”, Olga Nikolaenko stated.

The director went on to explain that the center is “in a panic” due to the unexpected eviction. They are now in a hurry to look for a new site so they can continue their work.

Nikolaenko stressed that the center is not involved in any sort of political activity, and their primary mission is to teach refugee children to read, write, and make friends.

Svetlana Gannushkina elaborated on the goal's of the Center, stating that the children "have formed an idea of ​​Russia through the Center and through our teachers... Clearly, this is very useful for the country. In addition, even if they just grow up and continue to leave to go somewhere, they will be the bearers of Russian culture. That is, the influence of Russia in the world community. We always say that Russia is losing influence. This is one of the sources of influence, and it is very important... Not the seizure of foreign territories, but the spread of culture."

According to Olga Nikolaenko, “we are not part of ‘United Russia’ [Putin’s political party]. So, apparently, we are not supposed to exist. Children, then, are not important, unfortunately.  [The center] exists precisely because the government ignores the problem of the need to integrate children into society. But they are just ignoring us and they refuse to face it."

Classes of the Center are now held at temporary sites while organizers try to find a new location and funding.

The Center for Adaption and Training of Refugee Children opened in 1996 to aid refugee children from the war-torn region of Chechnya. In March, the organization is set to celebrate its 20th anniversary.

Russia’s “Foreign Agent Law” was adopted by the State Duma in 2012. The law requires all nongovernmental organizations engaged in political activity that receive funding from abroad to register as “foreign agents” with the Ministry of Justice, a designation that severely hinders an NGO's ability to operate in the Russian Federation. While the law initially provided a vague definition of "political activity", the Ministry of Justice recently adopted a new amendment defining it as any work in the sphere of federal or municipal policies, defense, foreign policy, human rights, and civil rights.