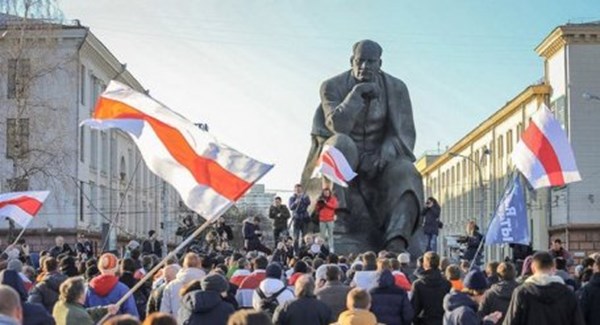 An opposition rally was held in Minsk on Friday on the unofficial national holiday “Freedom Day”, which marks the anniversary of the creation of the Belarusian People’s Republic on that day in 1918, Zaxid reported. Estimates on the number of participants vary from 500 to as many as 2,000.

The protesters were comprised of representatives of various social groups including pensioners, students, and entrepreneurs. The demonstrators voiced their dissatisfaction with the current Belarusian leadership, and called for European integration.

The organizers of the event were leaders of major opposition parties of Belarus and former Presidential candidates, and stated that the purpose of the rally was to draw attention to the lack of human rights and freedoms in the former Soviet republic.

“Today is a great date for Belarusians. Belarusians reminded the world that they are a nation and want to be independent,” opposition leader Mikola Statkevich said.

“Our people were killed but we survived. And now we can say – Viva Belarus! Despite the fact that our country has been independent for 25 years, it is not free. See you in free Belarus,” stated the leader of the Belarusian National Republic, the Belarusian government in exile, Ivonka Survila.

“The future of Belarus is our responsibility. Belarusians deserve to live in an independent European country,” one of the rally’s organizers, Anatoly Lebedko, added.