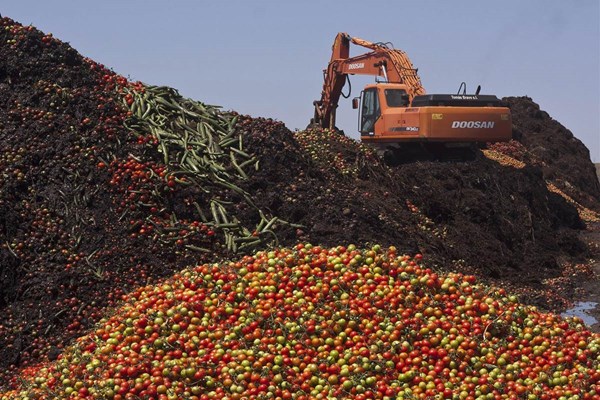 From August 6th to December 28th, the Russian government destroyed 1,762 tons of goods as part of the government's counter-sanctions in response to those imposed by the European Union and the US. The Federal Service for Veterinary and Phytosanitary Surveillance (Rosselkhoznadzor) reported to the news agency Interfax that 1,647 tons were for crop production and 115 tons were for livestock breeding.

Since August 6th there may have been as much as 2,500 tons of smuggled goods destroyed including over 2,300 tons related to crop production and 177.5 tons of livestock breeding products. More than 13,000 phytosanitary certificates of questionable authenticity were sent to the regulatory authorities of their countries of origin. 95% of them were deemed counterfeit. 236 veterinary certificates were also sent for confirmation to the veterinary services of country-suppliers.  Only 2 of them were deemed counterfeit.

The products were destroyed in accordance with the Presidential Decree “on certain special economic measures to ensure security of the Russian Federation.” According to the decree, signed on July 29th, 2015, it is illegal to import agricultural products from countries that support economic sanctions against Russia.  Such imports are subject to seizure and destruction.

The food embargo has been in force in Russia since August 7th, 2014, and concerns products from the US, EU, Australia, Norway and Canada.  This year the food embargo was extended until August 5th, 2016.  On August 13th, Albania, Montenegro, Iceland, and Liechtenstein joined the list of countries supporting anti-Russian sanctions.  From January 1st, 2016 Ukraine will also be included.