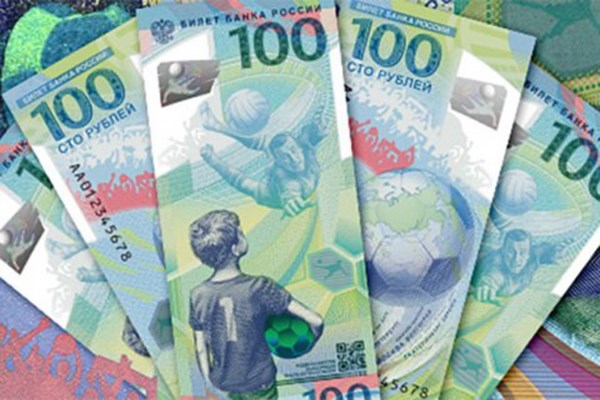 The National Bank of Ukraine (NBU) prohibited all financial institutions of the country from accepting Russian currency bills and coins depicting objects in the Crimea, UBR.ua news outlet reports, citing the regulation of the NBU.

It is reported that a hundred-ruble bill dedicated to the FIFA World Cup 2018 and also a 3-ruble coin that was put into circulation in March this year have been banned.

The NBU explained that the territory of the Russian Federation with annexed Crimea is depicted on the back of the hundred-ruble bill in the form of the ball in green, and the Holy Trinity Cathedral in Simferopol is depicted on the commemorative three-ruble coin.

At the same time the NBU demanded that Ukrainian financial institutions accept 200-ruble bills that were not subjected to any bans.

Earlier the NBU prohibited all Ukrainian banks and financial institutions from accepting Russian currency bills and coins depicting any objects located in the administrative territorial units of Ukraine that were annexed by the Russian Federation.

Besides the 200-ruble bill, a hundred-ruble bill that was issued much earlier and also five coin values of 2, 3, 5, 10 and 25 rubles are also prohibited in Ukraine now.