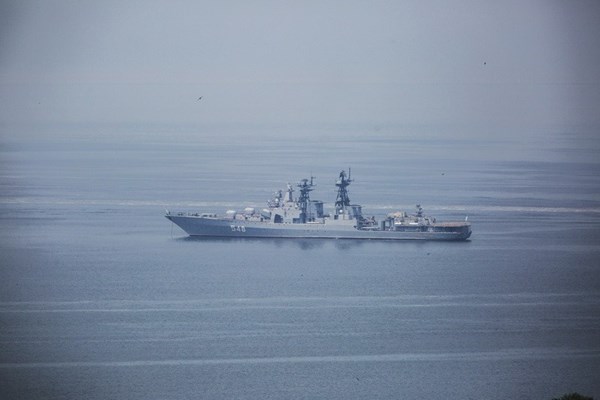 NATO spokeswoman Oana Lungescu confirmed that Russia is amassing warships off the coast of Syria.

“The Russian Navy has dispatched substantial naval forces to the Mediterranean, including several ships equipped with modern cruise missiles,” she said.

On Tuesday, the Russian media reported on Moscow’s largest amassing of naval forces since the start of the Syrian conflict in 2015.

The reinforcements coincide with a statement by Moscow’s ally, Syrian President Bashar al-Assad, that preparations are being made to attack the final rebel enclaves in the Idlib Governorate in northern Syria.

Lungescu said: “Many NATO allies border the Mediterranean, and our navies constantly operate there, so we monitor naval activity in the region, including that of Russia.”

“We will not speculate on the intention of the Russian fleet, but it is important that all actors in the region exercise restraint and refrain from worsening an already disastrous humanitarian situation in Syria,” the NATO spokeswoman added.

The Idlib province, a refuge for civilians and rebels who have fled from other regions of Syria, as well as for powerful jihadist forces, has been devastated by a wave of air strikes and bombardments this month, which may be a prelude to a full-scale government offensive. The US has warned the Assad regime not to use any chemical or biological weapons, and promises to deliver a “decisive response” if such weapons are used. Turkey, which has established military posts in the region, has cautioned Russia against attacking the region, something President Assad has repeatedly spoken about.

In April, a coalition of US, French and British forces attacked Syrian government facilities connected to the production of chemical weapons, after a noxious gas attack led to dozens of deaths in the Douma region. Russia-backed Damascus denies having used such weapons.