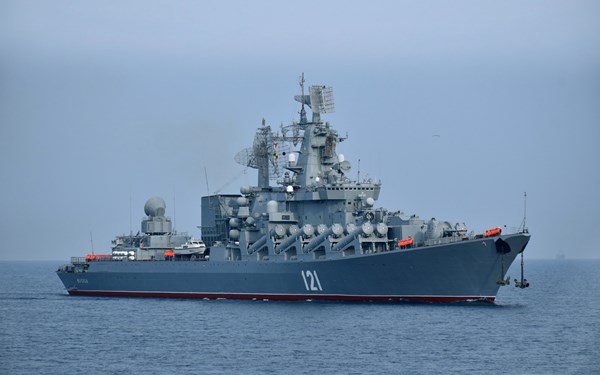 There were hundreds of conscripts aboard the Russian cruiser Moskva destroyed by Ukrainian missiles, reported the news outlet Agentsvo.Novosti, citing sources.

"It all comes down to about 300 conscripts," said a source who helps the relatives of the missing sailors to find tehm. “This is a common practice on all ships, Neustrashimyy, for example, with the same configuration. We need “go-and-get” sailors. All navy conscripts are distributed among the ships."

Another source of the Agenstvo heard similar assessments from officers of the Russian Black Sea Fleet.

According to the first interlocutor, only new ships, to which the Moskva does not belong, are manned exclusively by contractors. "There have always been and are conscripts aboard the Moskva cruiser," confirms Sergey Gorbachev, former deputy editor-in-chief of the Black Sea Fleet newspaper Flag of the Motherland, captain 1st rank in the reserve. "The crew is a living machine, it is impossible to replace part of it, to send conscripts home to their mothers, and contract soldiers to perform combat missions, it is impossible to do it quickly."

On April 13, Ukrainian authorities reported that Moskva, the flagship cruiser of the Black Sea Fleet, was hit with Ukrainian Neptune missiles. A day later the Russian Defense Ministry said that the ship "sank during towing" due to "damage to the hull received during the fire caused by an ammunition explosion." Later, the Russian Defense Ministry said that there were 424 people aboard the ship but did not specify how many of them were conscripts. Until now, the Russian Ministry of Defense admitted the death of one person from the cruiser Moskva, another 27 were declared missing.

Moskva" was the flagship of the Russian Black Sea Fleet. It was armed with 16 anti-ship missiles of the P-1000 Vulcan systems with a range of at least 700 km, long-range S-300 air defense systems S-300. During the Russian invasion of Ukraine, the cruiser took part in the attack on the Snake Island off Odessa coast.

At the beginning of the war in Ukraine, Russian President Vladimir Putin and other officials claimed that conscripts were not involved in the hostilities. After the appearance in the media and social networks of numerous reports of the participation of conscripts, the Kremlin recognized that some conscripts could have been involved in the hostilities, saying that this happened by mistake.