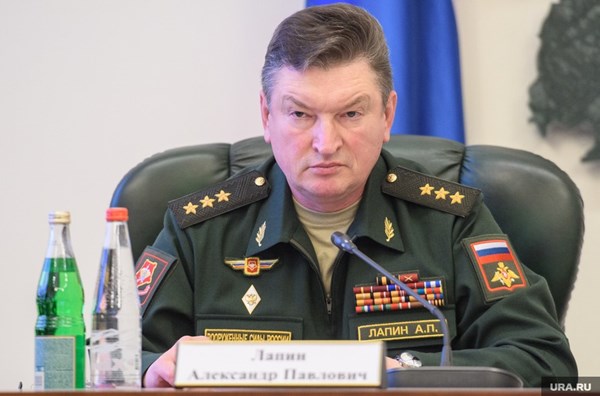 Colonel-General Alexander Lapin was appointed the new chief of the General Staff of the Russian Ground Forces, reported Russian media, citing sources in the Russian Ministry of Defense. According to the news agency RBC, Lapin's appointment took place at the end of 2022. The Russian Ministry of Defense did not officially confirm this information. Putin's press secretary Dmitry Peskov also refused to comment on it. "There are open decrees, there are classified decrees. There are no such decrees among the decrees that are published," Peskov said.

Until the end of October 2022, Alexander Lapin commanded the group of Russian troops "Center", which was supposed to capture Kyiv, and after the retreat from the Kyiv region was transferred to the east of Ukraine. After the troops led by Lapin captured Severodonetsk and Lysychansk in the Luhansk region at the end of June, he was awarded the title of Hero of Russia. At the end of March, right before the retreat from the Kyiv region, Lapin, as journalists of the BBC Russian Service found out, presented the award to his son, the commander of the 1st Guards Tank Regiment, Denis Lapin.

After crossing the Seversky Donets River on September 3, the Ukrainian troops launched an offensive on the city of Lyman in the Donetsk region, forcing the Russian army to withdraw by October 1. After that, Alexander Lapin was sharply criticized by the head of Chechnya, Ramzan Kadyrov. Lapin led the defense of this area and did not provide the troops with "the necessary communication, command and delivery of ammunition," Kadyrov wrote. He called the general a "mediocrity" who is protected by his patrons in the General Staff. The founder of the Wagner PMC, Yevgeny Prigozhin, agreed with Kadyrov’s assessment.

Lapin's dismissal from the post was believed to be caused by Prigozhi’s and Kadyrov’s criticism.