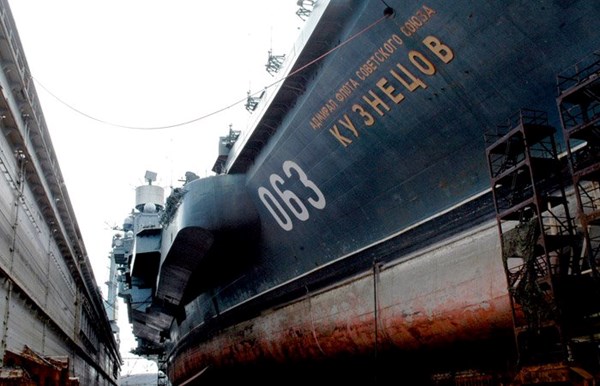 A fire broke out on the Russian aircraft carrier Admiral Kuznetsov which was undergoing repairs in the port of Murmansk, reports Interfax news agency.

"The area of the fire is about 600 square meters in the power compartment. Firefighters are working to put the second degree fire,” the source of the agency said, noting that the area of the fire cannot be accurately determined due to the thick smoke.

According to preliminary reports, diesel fuel on the ship caught on fire.

The Ministry of Emergency Situations of the Russian Federation in the Murmansk region refused to comment on the incident.

The press service of the Zvezdochka Ship Repair Center confirmed that the first power compartment of the aircraft carrier caught fire.

"We confirm that there was indeed a fire in the first energy compartment during. Workers who did their jobs there were evacuated. At the moment, firefighters are working to eliminate the fire," the company's press service said.

According to the latest data, one person has been reported missing as a result of the fire, the rest were evacuated and are safe.

In 2016, Admiral Kuznetsov participated in the military operation in Syria. Russian fighters carried out more than 400 combat sorties from the ship. Two fighter jets from the Admiral Kuznetsov crashed during its Syrian operation. A Su-33 rolled out of the deck and fell into the sea during the landing on the ship. In the second case, a MiG-29 fighter crashed when approaching the  ship.