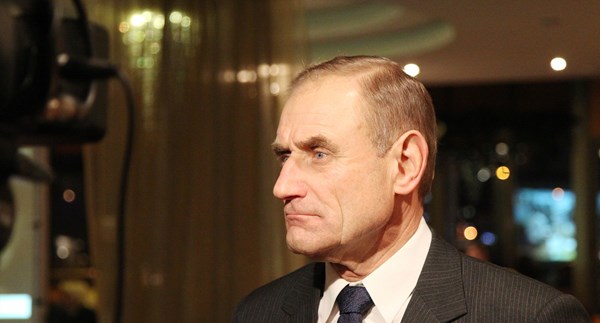 The Estonian Defense Ministry is not worried about Russia’s deployment of a helicopter base on Gogland Island in the Gulf of Finland, err.ee writes. In fact, when discussing this base, former Estonian Defense Forces Commander Ants Laaneots predicted the collapse of Russia.

On Wednesday it was learned that Russia has established a helicopter base on Gogland Island in the Gulf of Finland which it intends to make permanent. Five helicopter pads and all the related infrastructure have been added to the existing airport there. Gogland Island is a mere 40 km from the coast of Finland and 55 km from Estonia. Last year, the Russian military also set up a radar station on the island.

“I would say that nothing special is going on there and that we have no reason to be particularly worried about it,” said Estonian Defense Minister Jüri Luik.

He believes that Estonia’s airspace is well protected thanks to NATO forces, and that five Russian helicopters on the island are no cause for concern.

“For us the biggest risks are not bases like that, but the infantry that are being deployed in the Pskov province and the Leningrad province. When it comes to them, we are talking about not a pair of helicopters, but a hundred helicopters, possibly even more,” the defense minister noted.

Kalev Stoicescu, a researcher at the Tallinn-based International Center for Defense and Security, is of the opinion that the emergence of the new base cannot be ignored, but should not provoke an excessive response either.

“A good response to this is what we are already doing: reinforcing the country’s defensive capabilities in conjunction with our allies,” Stoicescu believes.

Estonian MP and retired General Ants Laaneots said: “Helicopters are not a means of attack, they can be destroyed easily if need be. Far more dangerous are bombers or fighter-bombers – in other words, combat aircraft. For this reason, I don’t see such a large or immediate threat to the base in Tapa or to our coast.”

According to Laaneots, both Estonia and Finland will be closely monitoring what kind of helicopters are deployed on Gogland and what purposes they serve. “Gogland has always been a militarized place, Finns have lived there, during World War II there were Finnish divisions there. It passed several times from hand to hand between the Red Army, the Finns and the Germans,” explained the former commander of the Estonian army.

Laaneots is convinced that the establishment of a base in Gogland is evidence of Vladimir Putin’s aspirations to reinforce his influence over the world.

“At present Russia is essentially being run single-handedly by former KGB lieutenant colonel Vladimir Putin, whose slogan is ‘Not one step back!’. Despite the fact that Russia is heading for a catastrophe – economists and other experts believe that sooner or later, the Russian Federation will essentially fall apart – Putin is trying to display his only trump: the army,” Laaneots remarked.

In his opinion, Russia’s most immediate goal is to reestablish control over post-Soviet space, and ultimately to become the global administrator.

“With respect to the sea, Putin has set the goal of establishing Russian control over the seas bordering on Russia. They have spoken about this publicly – and this also applies to the Baltic Sea region. And there are real plans for this,” added the retired general, who actually served in the Soviet Union armed forces long ago.

In order to achieve these goals, Laaneots believes that Russia is trying to make a show of force to the West wherever possible. “It’s clear that this now applies to Gogland, too, which has been strategically significant since Peter I started building St. Petersberg. This island is like a fortress in the Gulf of Finland, which closes off hostile forces’ approach to Kronstadt and today’s St. Petersburg. It looks like Putin is now trying to strengthen his presence in the Gulf of Finland. I think that this is a signal to Finland, but also to us. It shows once again that Putin has expansionist intentions,” the Estonian general concluded.