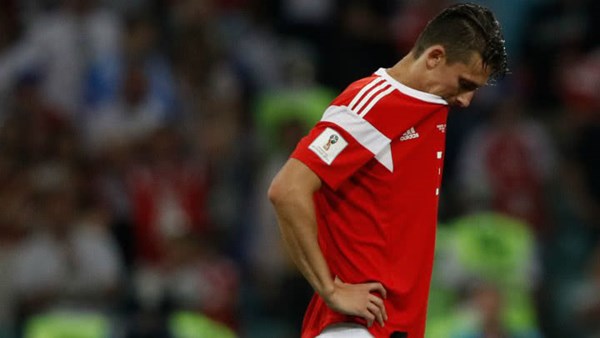 Bild, a German newspaper, has published material incriminating members of the Russian football team of doping to improve their physical condition during World Cup 2018 matches.

The newspaper claims that the Russian players inhaled ammonia in a room under the stands during the quarter final against Croatia (2:2, which Russia lost 3:4 in penalties), in order order to gain a physical advantage over their competitors. Ammonia is admittedly not on the list of prohibited substances, but an invited specialist claims that it can have a similar effect.

As proof of this theory, Bild published a photograph of Russian midfielder Aleksandr Golovin inhaling something from his palm.
Under certain circumstances in everyday life and in medical practice, ammonia spirits, i.e. a solution of 10% ammonia in water, are inhaled. Ammonia is frequently the active ingredient of smelling salts.

The physiological effect of ammonia arises from its local irritant effect: it stimulates the sensitive nerve endings of the upper respiratory tract, which in turn stimulates the respiratory and the vasomotor center of the brain, causing an increase in breathing rate and arterial pressure.
Eduard Bezuglov, the Russian team doctor, commented on the allegations that the players had inhaled ammonia, and that this is similar to doping.
“It was regular ammonium spirits, which they wet a wad of cotton wool with, and inhale,” Bezuglov explained. “This is done by thousands of athletes in order to perk up. It has been used for decades. This substance is not only in sport, but in people’s normal work – when someone loses consciousness or feels weak – to liven up. Just on account of a pungent smell. You can go to the pharmacy, buy a wad of cotton wool and ammonium spirits. It has nothing to do with doping,” Sport-Express cites the Russian team medic as saying.