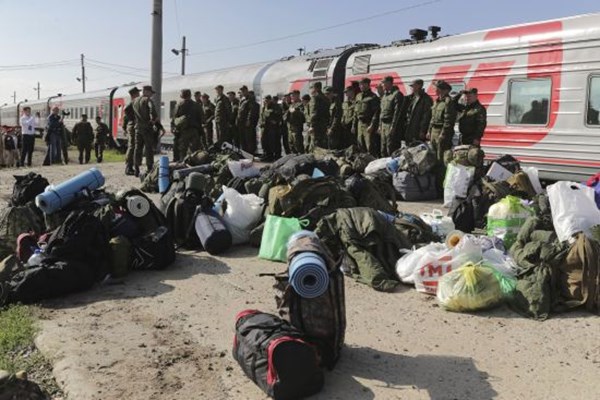 "This work is already coming to an end. Now there are 222,000 people mobilized out of 300,000 in the forming troops, and I think that within about two weeks all mobilization measures will be completed," Putin said at a press conference following his visit to Kazakhstan.

The announcement comes amidst further reports that mobilized reservists are receiving little to no training and are given outdated and inoperable weapons.

On Thursday, the Institute for the Study of War, a US-based think tank, released a report highlighting some of the reports that have emerged from Russia and Ukraine concerning mobilized reservists.

According to the report, Russian media reported that five mobilized men from Chelyabinsk have already been killed in combat in Ukraine.

"The report led many pro-war milbloggers to claim that the number of dead and wounded among mobilized servicemen is likely higher than this due to the lack of promised training, equipment, unit cohesion, and commanders, as well as repeated instances of wrongful mobilization," the ISW’s report read.

The report explains that Russian milbloggers have reported that some “Mobiks” have been deployed without any pre-combat training at the order of Mikhail Zusko, the Commander of the 58th Combined Arms Army of the Southern Military District.

Ukrainian media then reported that Zusko had been arrested due to the heavy combat losses that were suffered.

"One Russian milblogger complained on October 13 that newly mobilized men are being deployed in a haphazard way that will lead to 10,000 deaths and 40,000 injuries among them by February 2023," the ISW added.

Reports have also emerged that “Mobiks” have been surrendering to Ukrainian forces in large numbers.

Many analysts have argued that the Kremlin will likely mobilize more than 300,000 reservists. Given the haphazard way reservists have been mobilized since Putin announced his intentions of September 21st, the Kremlin’s official figures regarding the number of reservists to be mobilized is questionable.

Putin went on to say that the Russian Ministry of Defense has not submitted proposals to mobilize additional troops.

“No proposals have been received from the Ministry of Defense in this regard and in the foreseeable future I do not see any need," Putin stated.