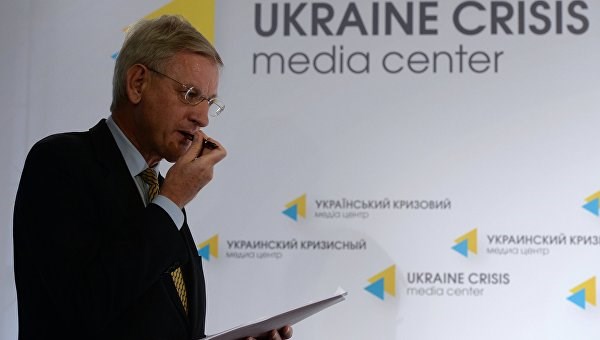 The Government of Ukraine may be headed by the former Swedish Prime Minister, Carl Bildt, instead of Arseniy Yatsenyuk, as reported by , citing a source in the presidential administration.

The appointment of Bildt, as the newspaper notes, would simplify the negotiations with international money lenders for Kiev, and would also allow President Poroshenko to take greater control of the activities of the government. In addition, such a personnel choice would help the authorities to shift some of the responsibility for reforms in Ukraine onto the West. Yet the former Swedish Prime Minister is not able to be a political competitor to Poroshenko.

At the same time, Bildt’s appointment to the post of Prime Minister could cause a negative reaction among Ukrainian patriots. In addition, it would be difficult for him to adapt to the realities of Ukrainian politics, says .

Among the other possible successors of Yatsenyuk the publication lists are the Minister of Finance of Ukraine, Natalia Jaresko; Governor of Odessa, Mikhail Saakashvili; head of the administration of the President, Boris Lozhkin; Verkhovna Rada Speaker, Volodymyr Groysman; and Secretary of the National Security and Defense, Oleksandr Turchynov.

The immunity period granted by the Ukrainian government and guaranteed by the parliamentary coalition expired on December 11th. At that time, the Verkhovna Rada had the opportunity to request the resignation of all Cabinet members. In November, Yatsenyuk threatened that his party’s ‘Narodnyi Front’ faction would depart from the coalition if the Verkhovna Rada votes for his resignation.

Recently, talks about the possible resignation of the head of the government have become more frequent in the Ukrainian power structure. Yatsenyuk’s Cabinet of Ministers is accused of failing to solve the economic problems of the country.

The new Ukrainian leadership is actively seeking foreigners to participate in the work of making administrative reforms. In September, Poroshenko invited former Australian Prime Minister, Tony Abbott, to take part in the reforms undertaken by ; and in late May, he signed a decree appointing of ex-Georgian President, Mikhail Saakashvili, as Governor of Odessa.

Since May of 2015, Carl Bildt has been a member of a Consultative International Council of Reforms, created by Poroshenko. The council, in addition to him, includes U.S. Senator John McCain and Member of the European Parliament Elmar Brok.

Carl Bildt was Prime Minister of Sweden from 1991-1994. From 2006 to 2014 he headed the Ministry of Foreign Affairs of the Kingdom. Bildt has repeatedly made harsh statements against Russia, and was one of the first among European politicians to recognize the new Ukrainian authorities in February of 2014.