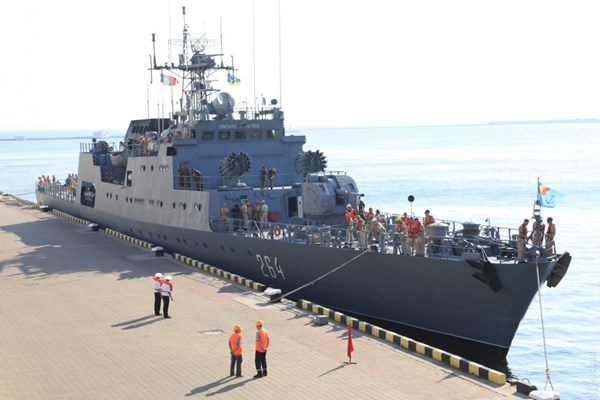 The Romanian Navy’s corvette, Contra-Amiral Eustaţiu Sebastian (F-264), arrived in the port of Odessa on the 18th of July. The ship will be taking part in the international Sea Breeze 2016 exercises, which will be held during the last ten days of July in the northwestern part of the Black Sea and in the south of Odessa and Mykolaiv. This was reported by the press service of the administration of the Odessa seaport.

The 93-meter ship, with its crew of 77 people, joined the Romanian Navy in February 1983. It has a heliport on board as well as a standard armament consisting of: one universal naval gun AK-176 caliber 76 mm, a six-barreled automatic naval gun, four 533 mm torpedo launchers and two RBU-6000 anti-submarine rocket launchers.

According to the Ukrainian Navy press center, the theme of the exercises will be the planning and conducting of the international peacekeeping operation in the crisis area.

The Command of the Naval Forces of Ukraine believes that these exercises will increase the level of training of fleets by conducting multinational operations in crisis areas, and will also deepen the trust between seamen of different countries. As a result of this, the exercises will promote the maintenance of peace and stability in the Black Sea region.