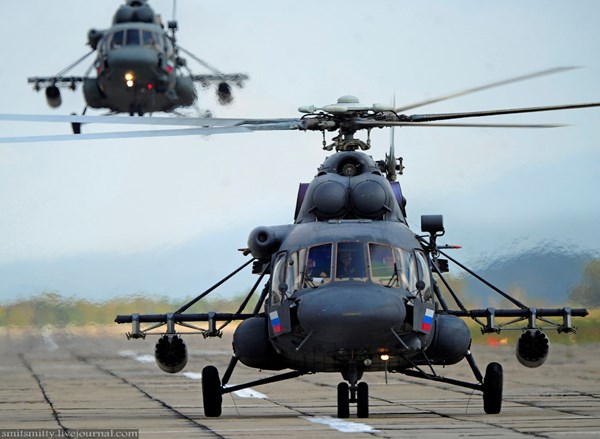 The first batch of Mi-8ATMSH Terminator attack helicopters was delivered to the District Army Aviation Unit in Vladivostok, as reported by Russia’s TASS news agency citing the District’s Press Service. This was the first of the year’s scheduled deliveries.

“New helicopters were delivered to the District Army Aviation Unit in Zabaykalsky Krai. They were accepted by the Unit Technical Specialists at the manufacturing plant and pilots tested the helicopters during a flight to their permanent station,” the statement said. The Press Service did not specify how many helicopters entered the first batch this year.

The design of the Mi-8AMTSH Terminator was based on the Mi-8AMT multipurpose helicopter. The Mi-8AMTSH is equipped with new avionics, including weather radar, satellite navigation equipment and infrared equipment, as well as night-vision goggles for pilots. The helicopter can be equipped with various types of armament on beam holders at the sides of the fuselage, including missile systems with guided missiles.

Helicopter maximum take-off weight is 13 tones. Its maximum speed is 250 km/h while its cruise speed is 230 km/h. The aircraft has a flying range of 610 km and can carry a disposable load of up to four tons.