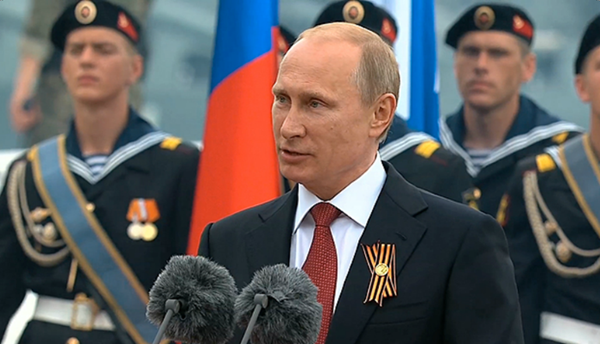 Russian President Vladimir Putin has congratulated the presidents of nine states, including the so-called republics of Abkhazia and South Ossetia, on Victory Day. He did not, however, extend these well wishes to the leaders of Ukraine and Georgia, but he did congratulate the citizens of these countries. This was reported on the Kremlin’s website.

“Vladimir Putin congratulated leaders of Azerbaijan, Armenia, Belarus, Kazakhstan, Kyrgyzstan, Moldova, Tajikistan, Turkmenistan, Uzbekistan, Abkhazia, South Ossetia, as well as the citizens of Georgia and Ukraine, on the 71st anniversary of the victory in the Great Patriotic War," the website reported.

Putin stated that “Victory Day is a sacred holiday that will forever remain a symbol of heroism and of a union of people who defended their homeland in bloody battle and saved the world from fascism”.

On May 9th, Russia celebrates the victory of the Red Army and the Soviet people over Nazi Germany.

In 2004, the UN General Assembly declared that the 8th and 9th of May be days of remembrance and reconciliation.

UN member states and non-governmental organizations are encouraged to not only celebrate their own days of victory or liberation, but also to set aside one or two days every year as a tribute to victims of World War II.