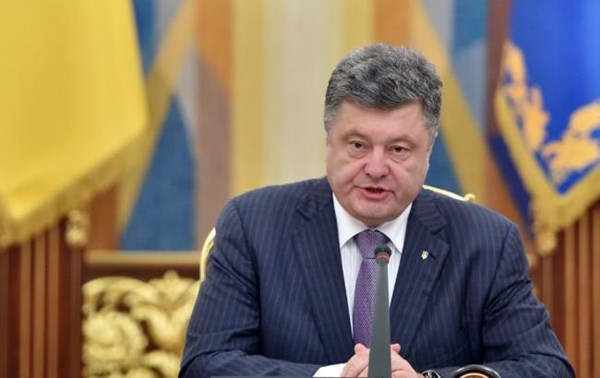 The first Deputy Editor-in-Chief of the Zerkalo Nedeli, Sergey Rahmanin, wrote an article in which he cited a source that stated that the President of Ukraine, Petro Poroshenko, is considering holding a referendum to allow the citizens of Ukraine to decide on the autonomy of breakaway territories of the Donbas. According to him, this referendum would be an alternative to elections in the separated areas of Donetsk and Lugansk Regions.

“According to our sources, Poroshenko occasionally returns to an idea that he abandoned in 2015. It’s about the possibility of holding a referendum, where the citizens of Ukraine could express views on the idea of granting autonomy to the separated territories of the Donbas. The motive is clear. If the citizens of Ukraine say ‘yes,’ the President will absolve himself of liability for pushing the decision, which would be dangerous for his rating, through the Verkhovna Rada of Ukraine. If they say ‘no,’ Poroshenko can justify the failure of implementing the Minsk Agreements by the sovereign will of the people. However, will Berlin and Washington, let alone Moscow, accept such justification? Petro Oleksiyovych must be afraid of the rough reaction of West which has already been irritated by his non-binding character,” the article says.

“While those who are familiar with the views of Petro Oleksiyovych believe that the President of Ukraine wants to see ORDLO [occupied territories of Donetsk and Luhansk] as a part of Ukraine as well as to wage war,” Rahmanin wrote. In addition, according to Rahmanin, one other technicality bothers the head of the State.

“After the election in ORDLO, de facto, these territories will still be beyond the control of Kiev but by law they will become controlled by Kiev. Those citizens could regain the right to take part in national elections. In any case, Moscow had raised this issue. People will definitely vote against the Poroshenko Bloc/Solidarity Party in the parliamentary elections and against Petro Poroshenko in the presidential elections.  However, he is already seriously thinking about his second term and he is absolutely sure that he has earned it. In any case, such expansion of the electorate both in parliamentary and presidential elections gives a second chance to the revanchists,” the article says.

As Rahmanin previously wrote in his article The Change of Course, the election in the breakaway regions of eastern Ukraine and recognition by Kiev are considered the objectives for a peaceful withdrawal of Russia from the conflict in the Donbas that will allow Putin to retain control over these regions and still address the removal of sanctions.